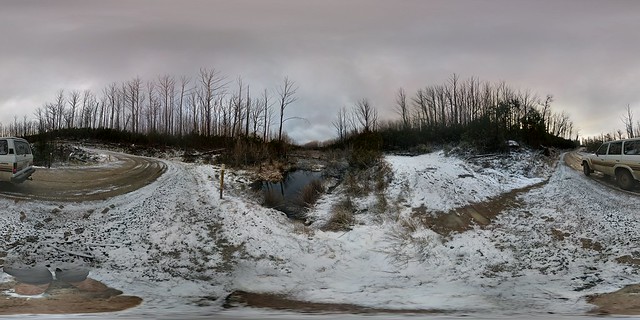 A day exploring beyond Lake Mountain, Victoria
A 2D view of a spherical image. View it in a spherical viewer

I was initially skeptical, but curious about Cardboard. I’m skeptical of immersive and virtual reality in education generally, but I do like the approach Google brings to many things. With a name like Cardboard, it undermines the techno wonderment of its competitors, and offers up a product that almost anyone can access and even copy and appropriate.

What excited me most though, was the Google Camera app and it’s ability to take spherical photos, for viewing in Cardboard, Google Maps and Google+. I’d seen these photos and videos before, but it wasn’t until I shot my first spherical photo that I realised some creative potential.

I could see the additions I would make to Google Streetview for example, loading spherical photos of my favourite lookouts, parks and buildings, even interiors. I could see useful applications in journalism, where a scene was no longer composed into a frame – being the first editorial decision, but captured in a spherical image that encompasses much more contextual information of a scene or event. Similarly, I could see applications in some forms of evidence gathering, monitoring and surveillance, body worn cameras, and traffic cameras, where the extra contextual information could be of use, or vision on a full environment is necessary.

But for me, exporting 2D frames from a screen viewed spherical image has opened up new ways of composing 2D images.

These images capture scale, such as trees and waterfalls that a normal 2D struggles to represent. And interesting distortions in the exported image give new compositional potential, similar but different to fisheye effects.

And finally, I enjoy bringing home spherical photos for the kids to look at through the Cardboard viewer – it’s brought back the long lost family slide night.

[…] are your ideas for using Google Cardboard for learning at RMIT? You can check for ideas here or here. If you are staff or a student place your idea in the comments below and we will send you […]

[…] are also a number of examples of low road design for online education. Google Cardboard, for one, does a great job of providing an easy and super low cost entry point into VR and 360 […]